On the grounds of Forest Lawn Memorial Park, there are buildings and multiple architectural structures known as "features." There were two periods of construction. The earliest were built in the early years of the cemetery—1930s followed by another period of construction in the 1950s. Most of the structures have survived with the exception of the water features.

Forest lawn has two magnificent Gothic-style buildings that were constructed during the early years of the cemetery. Both buildings were designed by Monroe Walker Copper, Jr. of the firm Dunn and Copper from Cleveland. 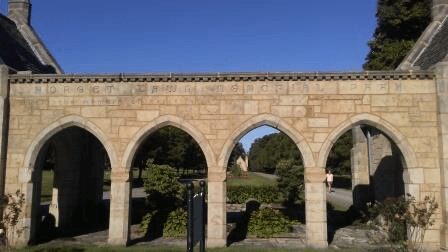 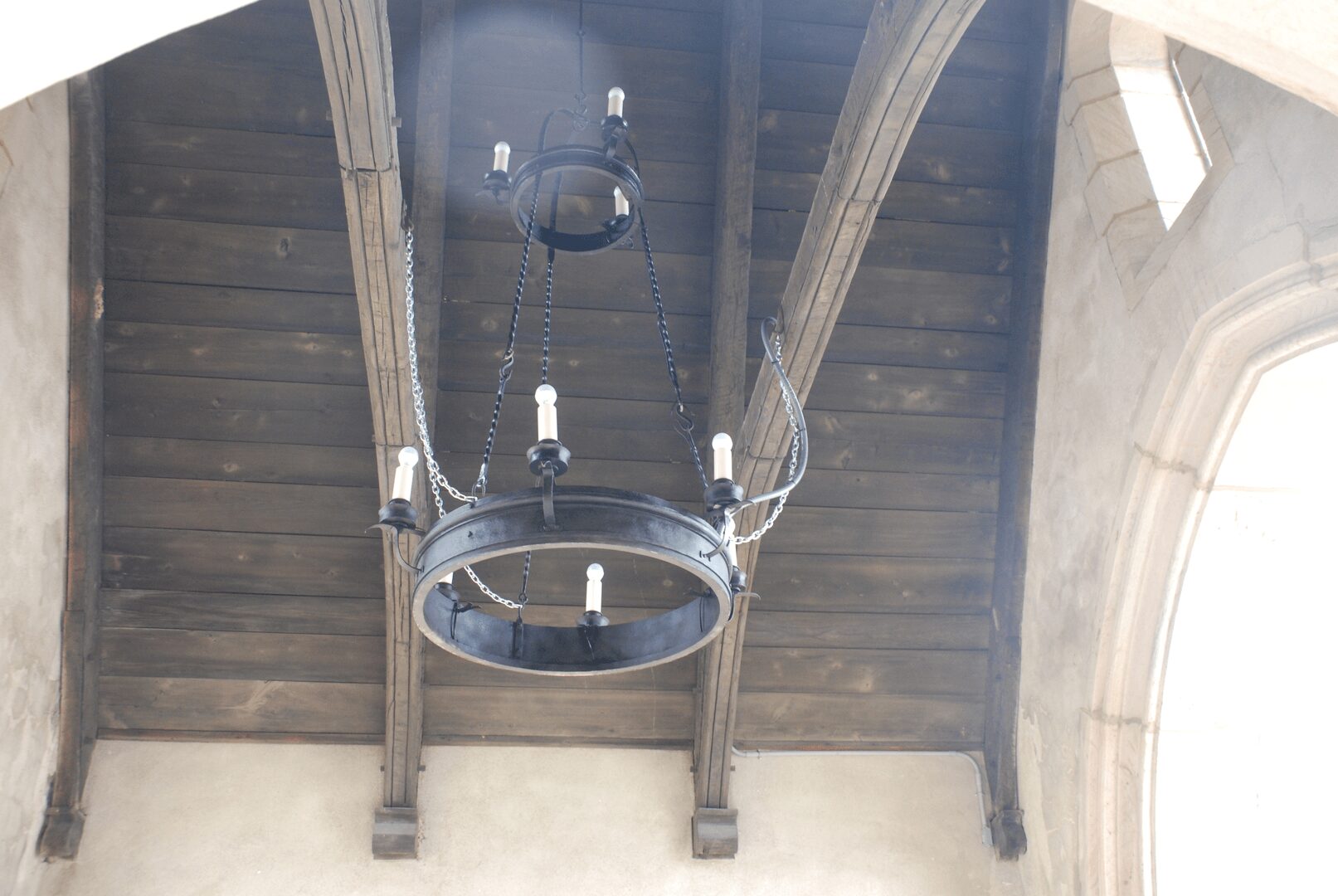 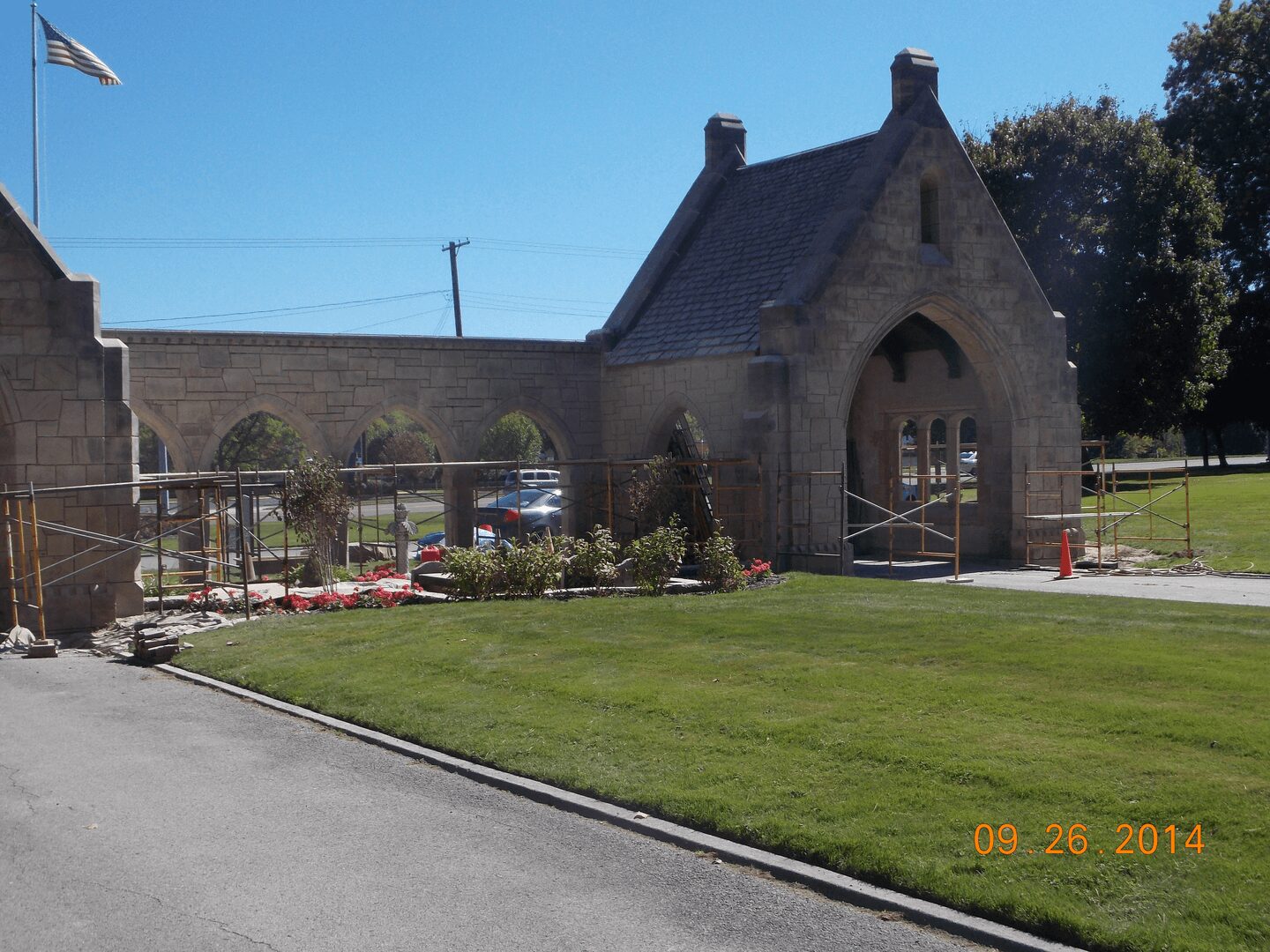 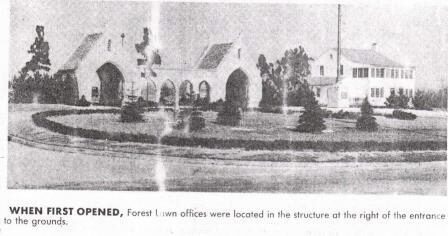 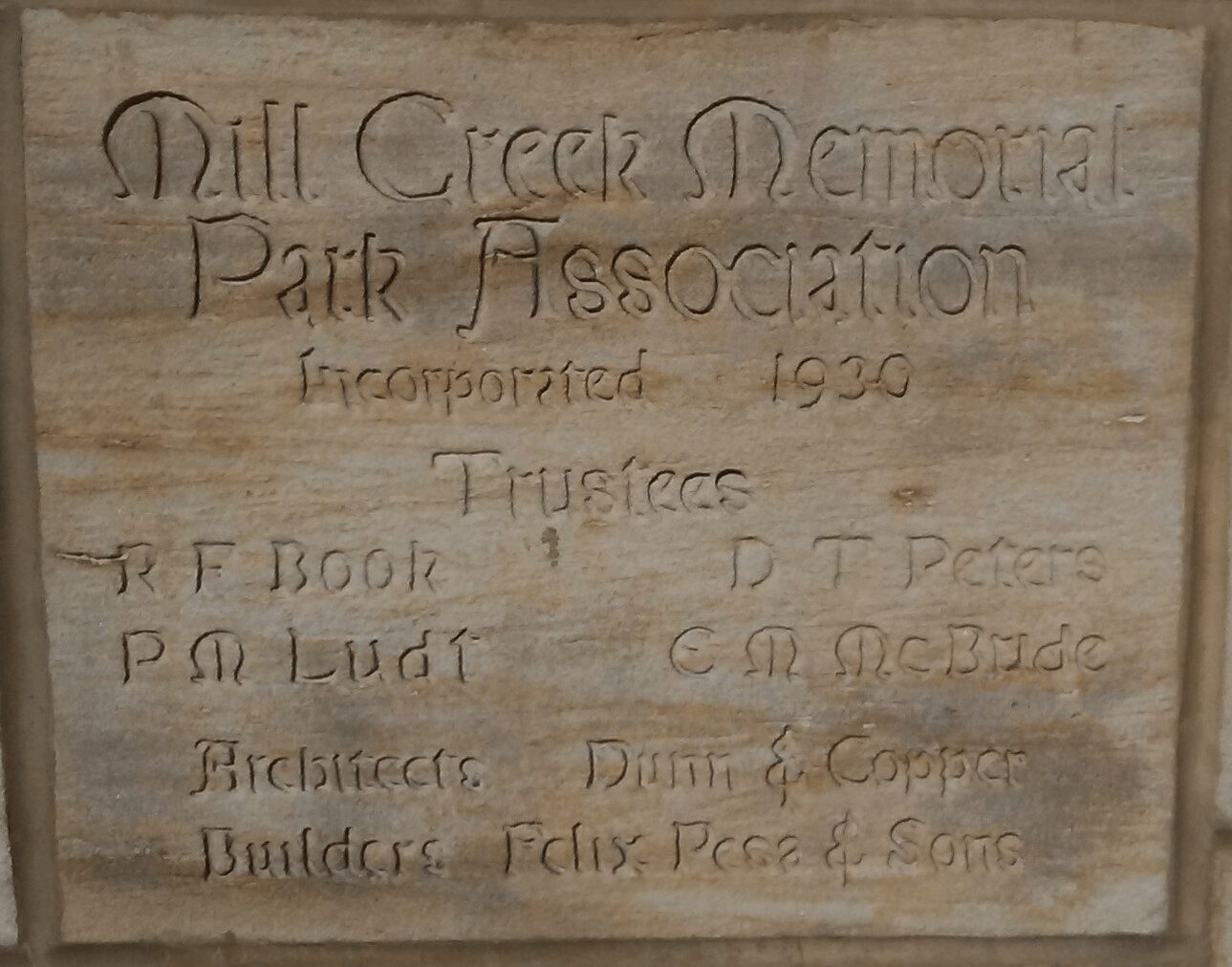 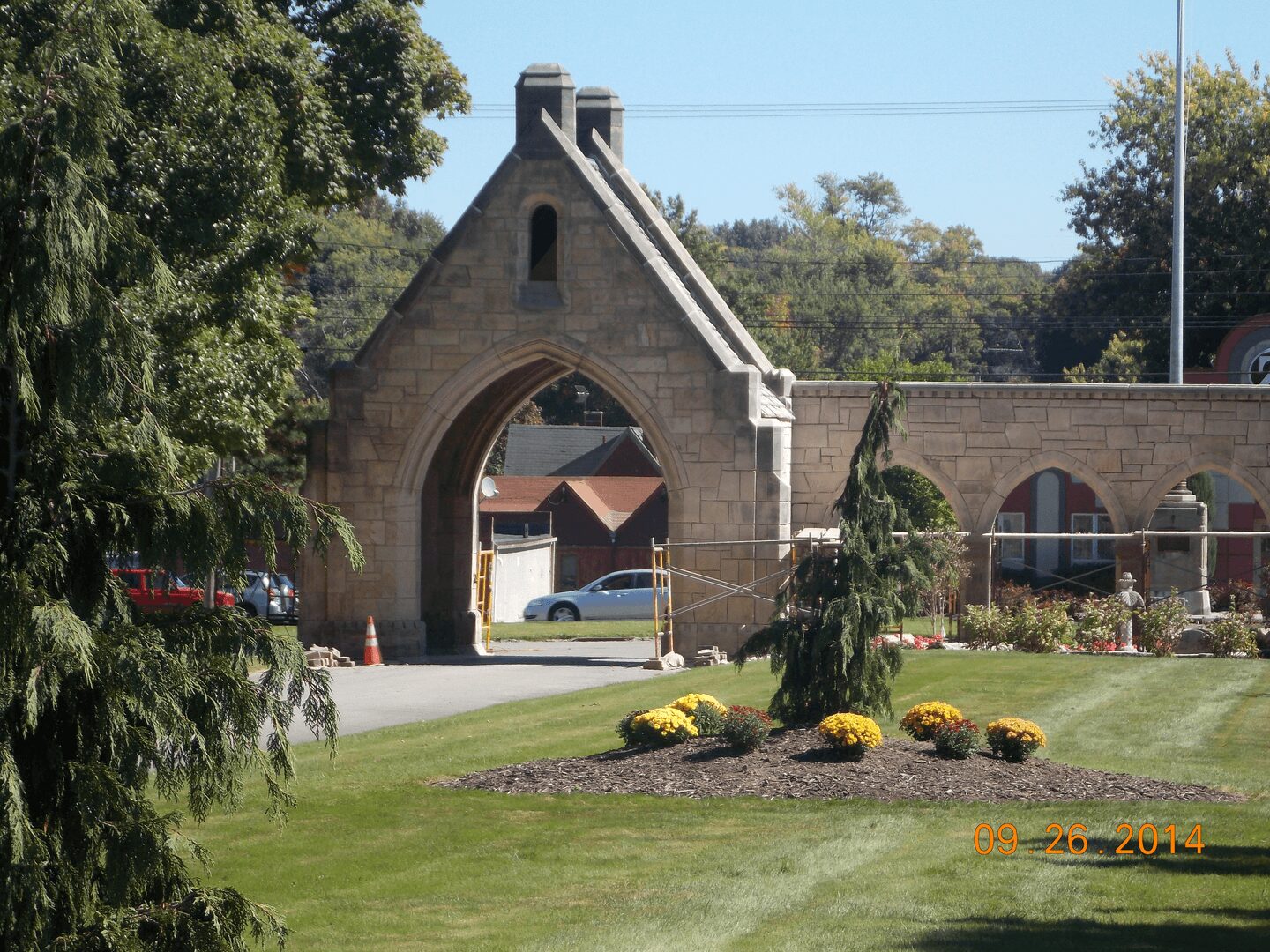 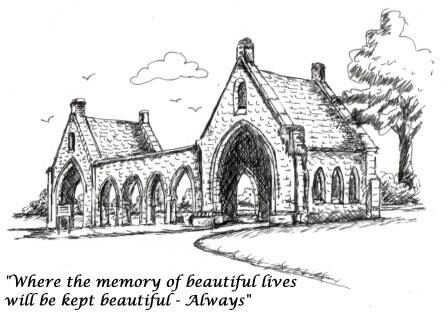 The Market Street Entrance was the first to be constructed around 1930. The random slate roof and Mount Plsbia stone give the appearance of great age. Felix Pesa Associates of Youngstown were the project's stonemasons. Four small arches stand between the large double gateway arches. Behind the four arches was a small pool and fountain, stone walkway, and benches. Today, the pool no longer exists and has been converted into a garden area. The large double gateway arches marked the roads leading into and out of the cemetery via a parallel grand boulevard known as the Boulevard of Remembrance. In 2014, extensive renovation work was performed on the entrance. The stonework was re-pointed, electric reconnected, and the original iron chandelier restored, rewired, and lighted.

Construction began on the Forest Lawn Chapel in May 1935. Originally known as "Little Church" at Forest Lawn, it was completed and dedicated on Memorial Day, 1936 as a non-sectarian chapel at a cost of over $100,000. The chapel was constructed by Hadlock Krill and Company. “The exterior walls will be of warm yet colorful stone, with a heavy roof of thatched stone slate to blend. The front entrance porch patterned after the south porch of the old church at Castlecombe, Wiltshire, England built in the 12th century.” A rose window graces the east wall of the chapel over the front porch entrance. Copper described it as a “replica of the one in the famous Reims Cathedral, France.” An impressive tall slender Norman spire rises high above the outside northwest corner of the chapel.
The design of the nave was copied from a little church at Iffley, Oxfordshire, England built by the Norman Invaders in the latter part of the 11th century. The interior of the chapel walls is finished in art plaster with stone trim.

Oak timbers with carved hammer beams support the ceiling. The chancel area is of carved wood and includes a pulpit copied after an original used in a 15th-century little parish church at Parton, Kirkcudbrightshire, England. The original is now in the National Museum of Antiquities in Edinburgh, Scotland. On it is carved the date it was built, 1598. Use of Ironwork was a hallmark of the architect. Note the use of iron scones, chandeliers, lanterns, hardware, chancery screen, sundial, gutters, and steeple decoration throughout the interior and exterior of the chapel. The use of iron also appears on many of the early features of the1930's (below).

A left wing, similar to a chancery chapel, was originally designed for family privacy during a committal or funeral service. The wing is separated from the nave of the chapel by detailed iron-work. In recent years, drapery and a glass partition have been added, so this area can be used for administrative purposes. This provides a space where persons with mobility issues have access to the cemetery offices. 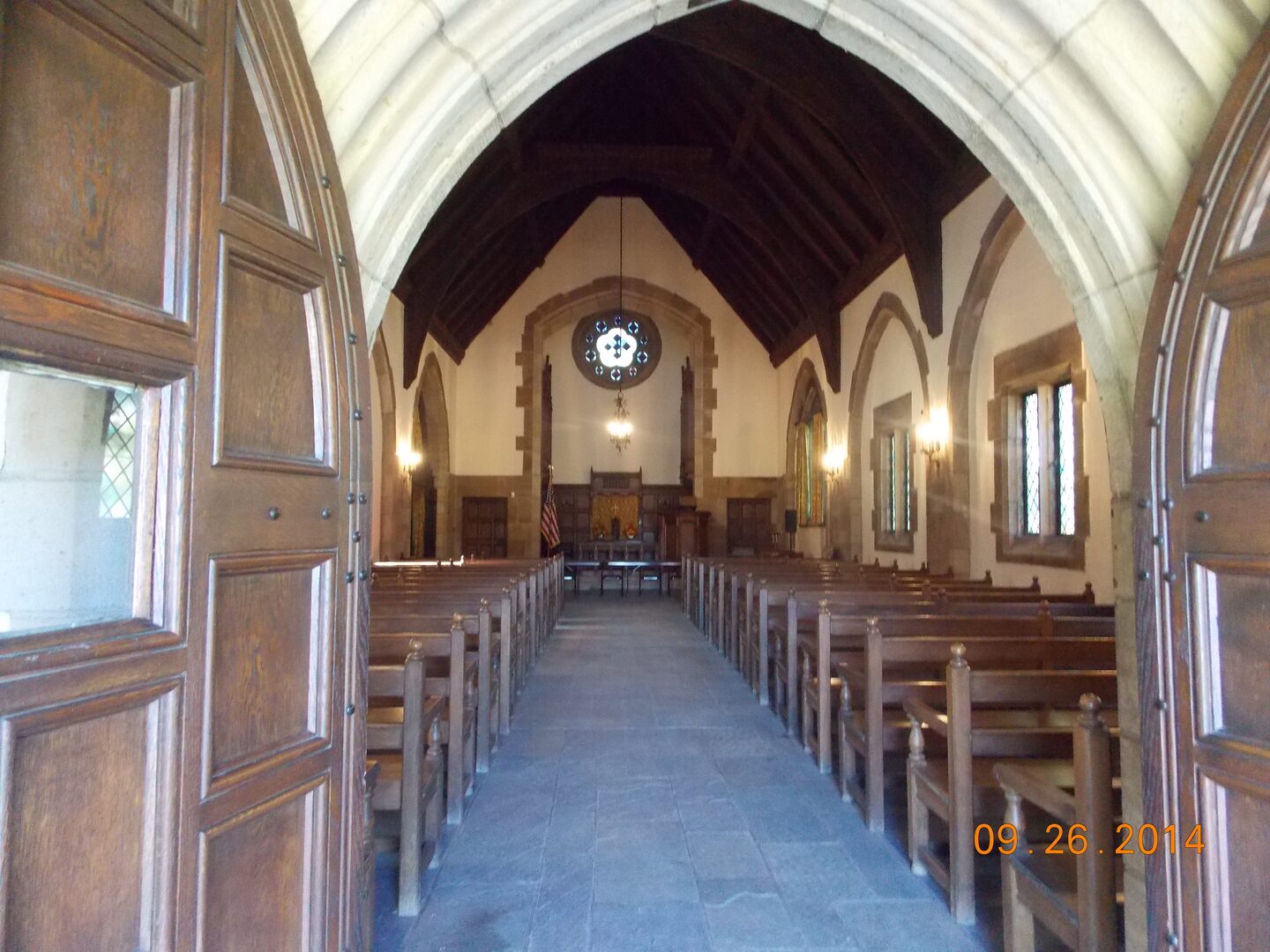 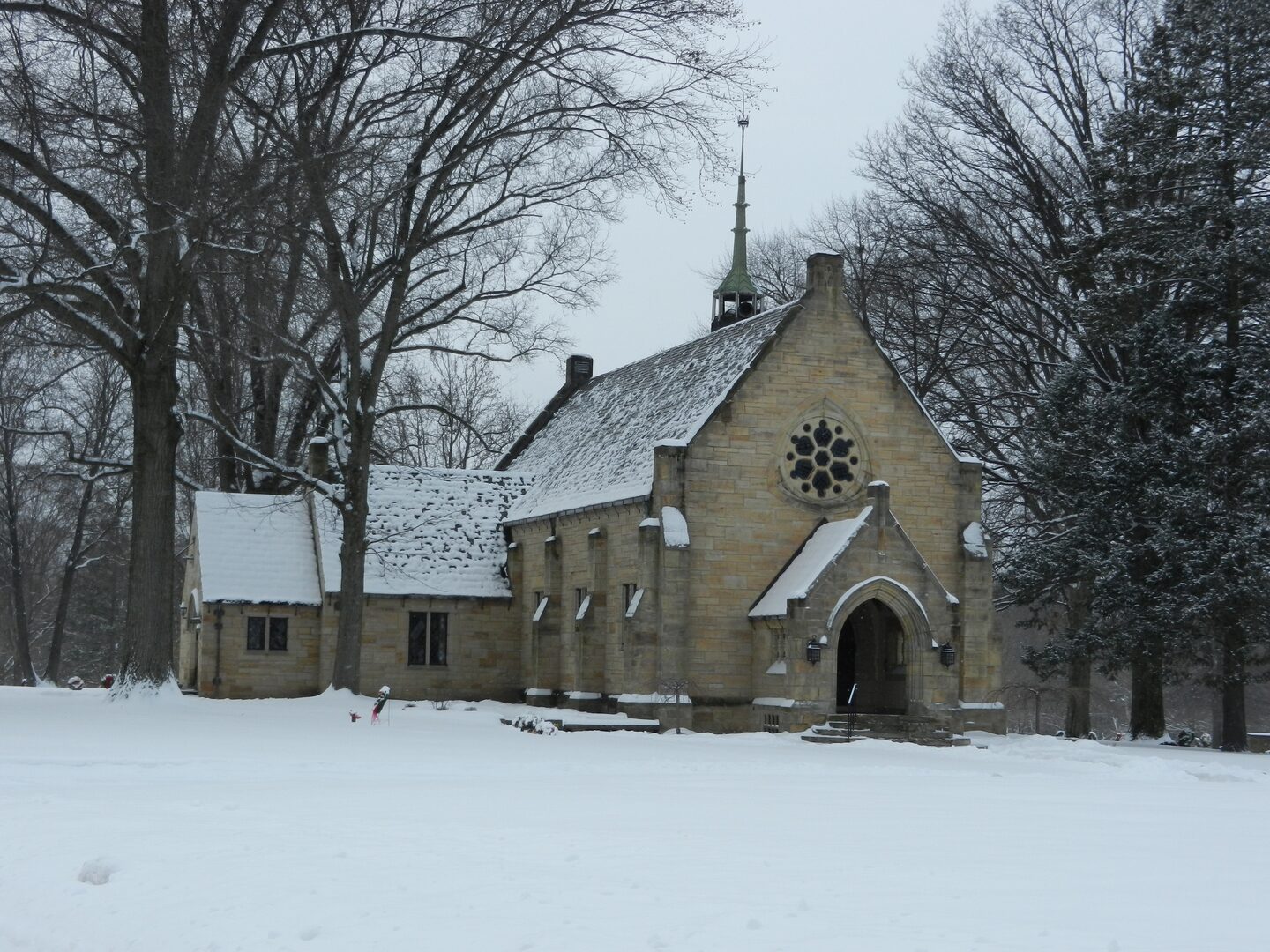 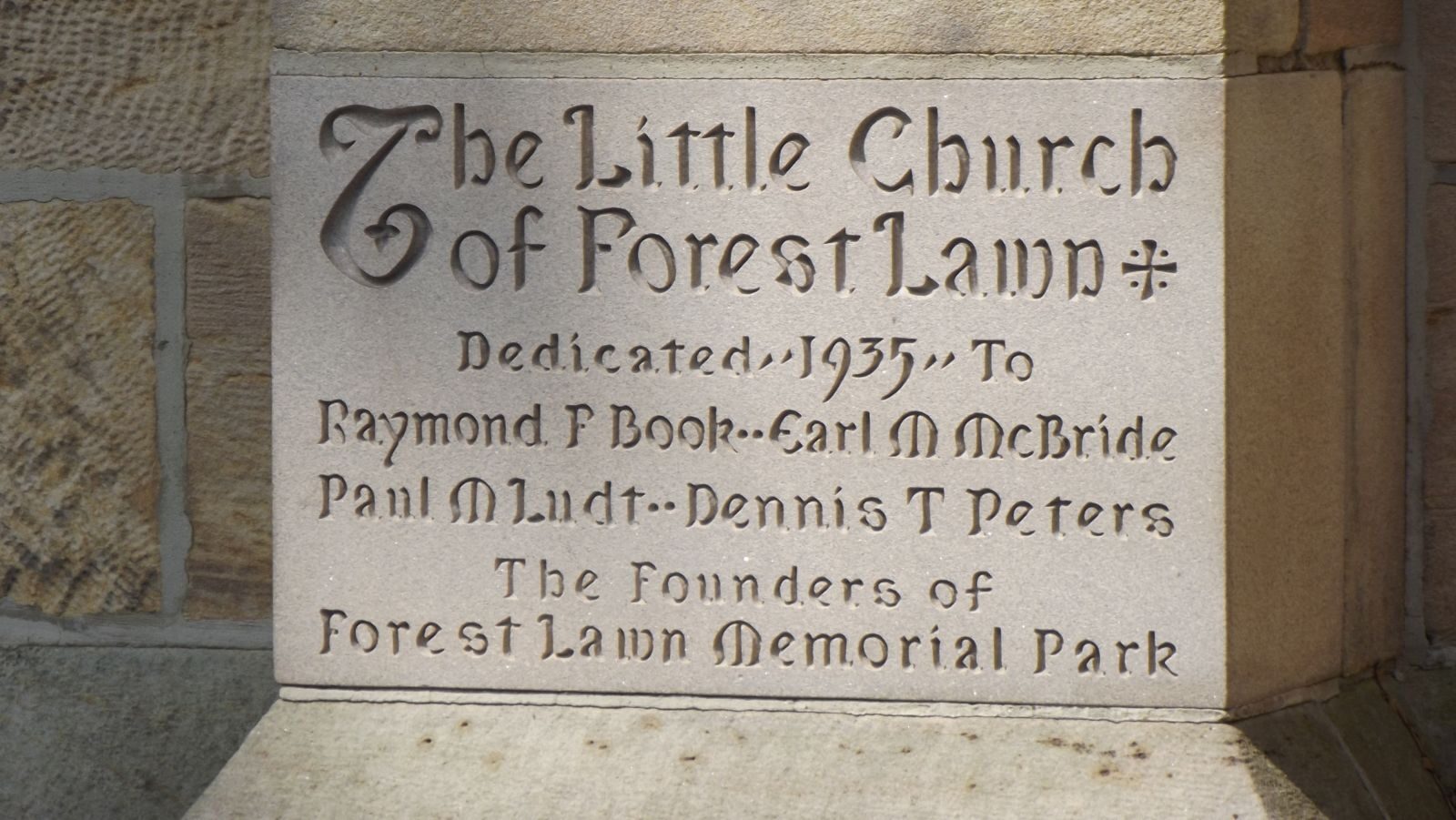 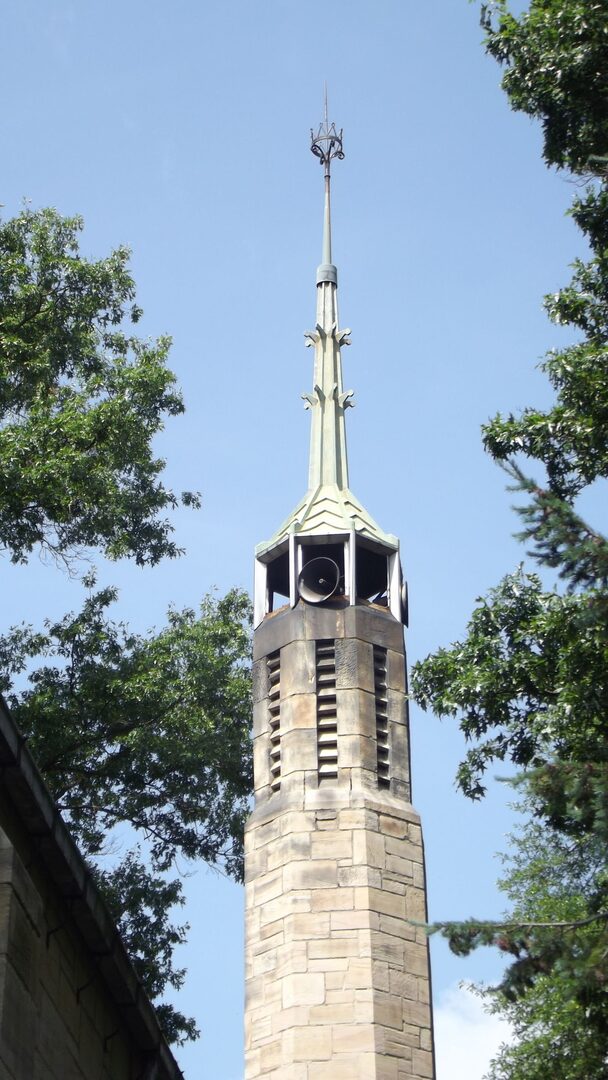 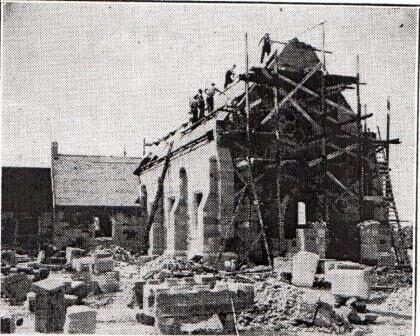 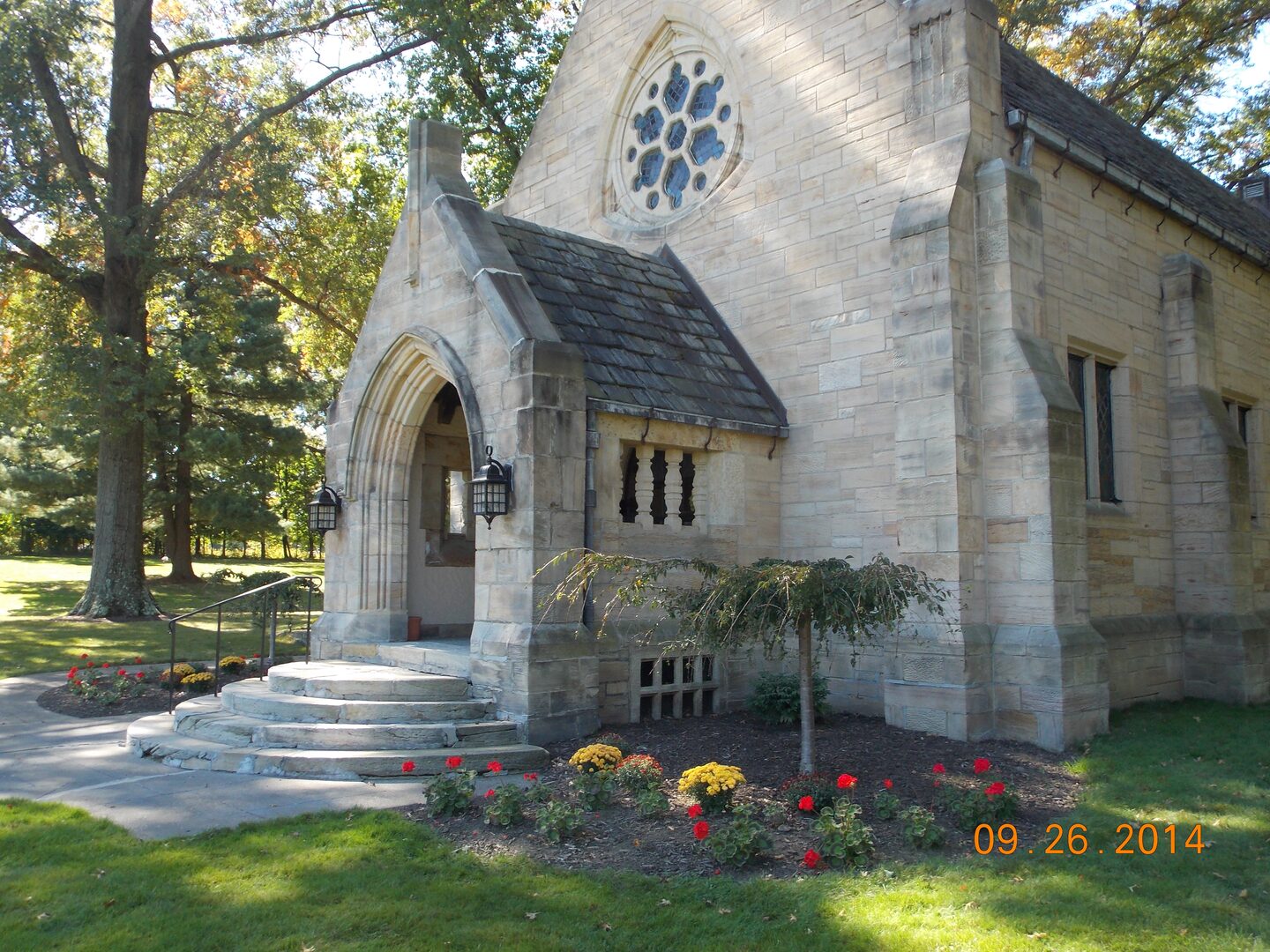 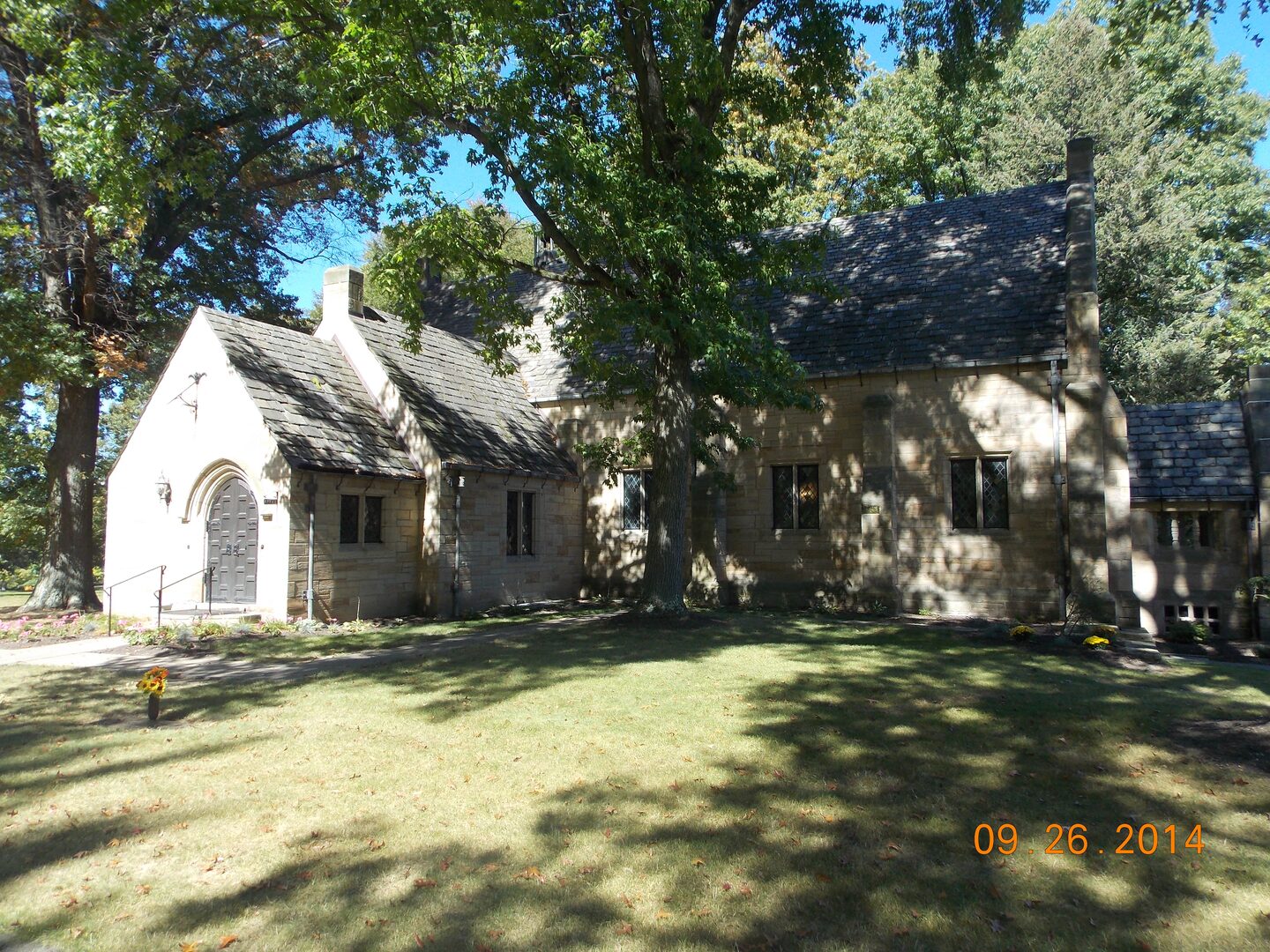 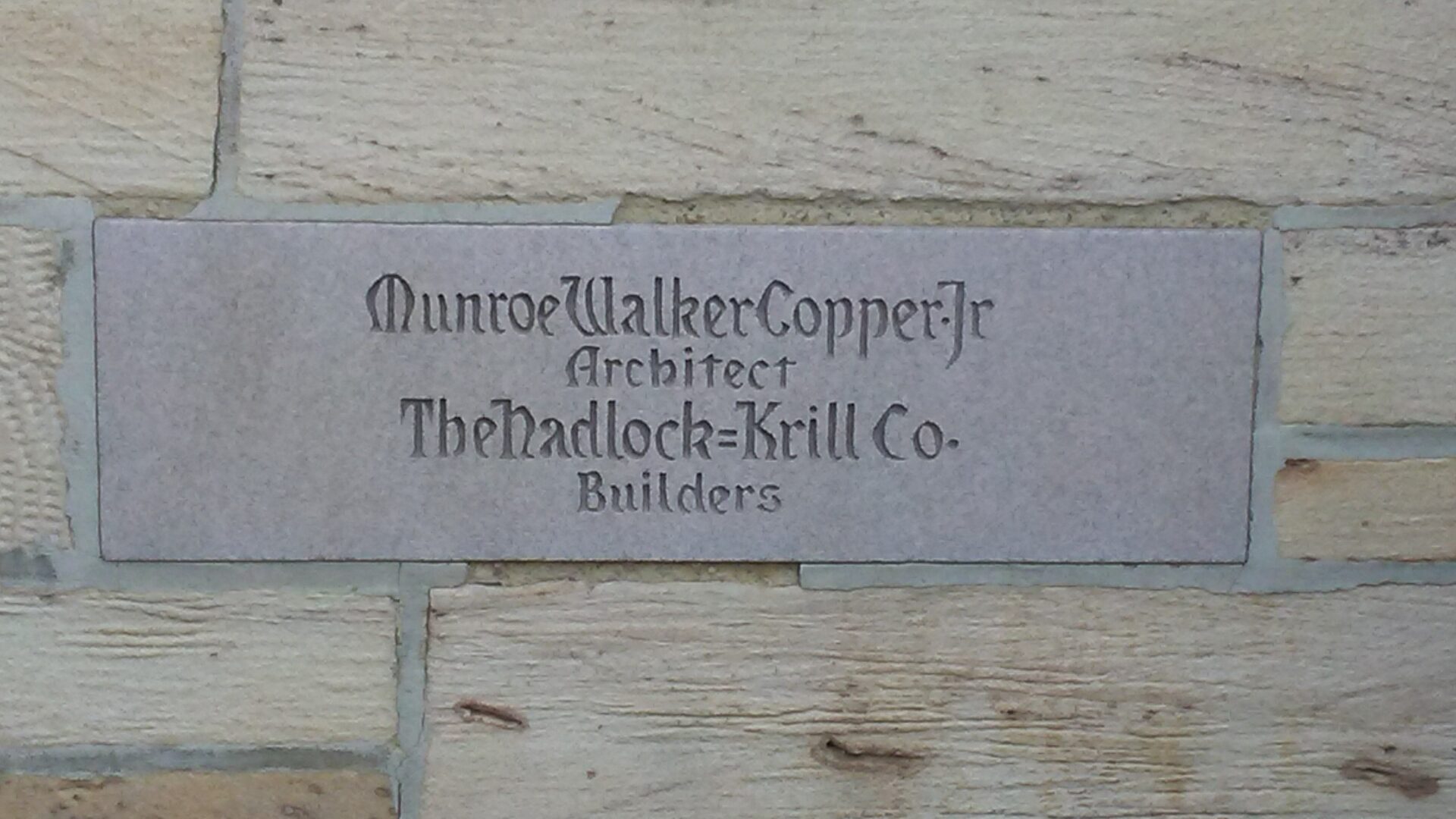 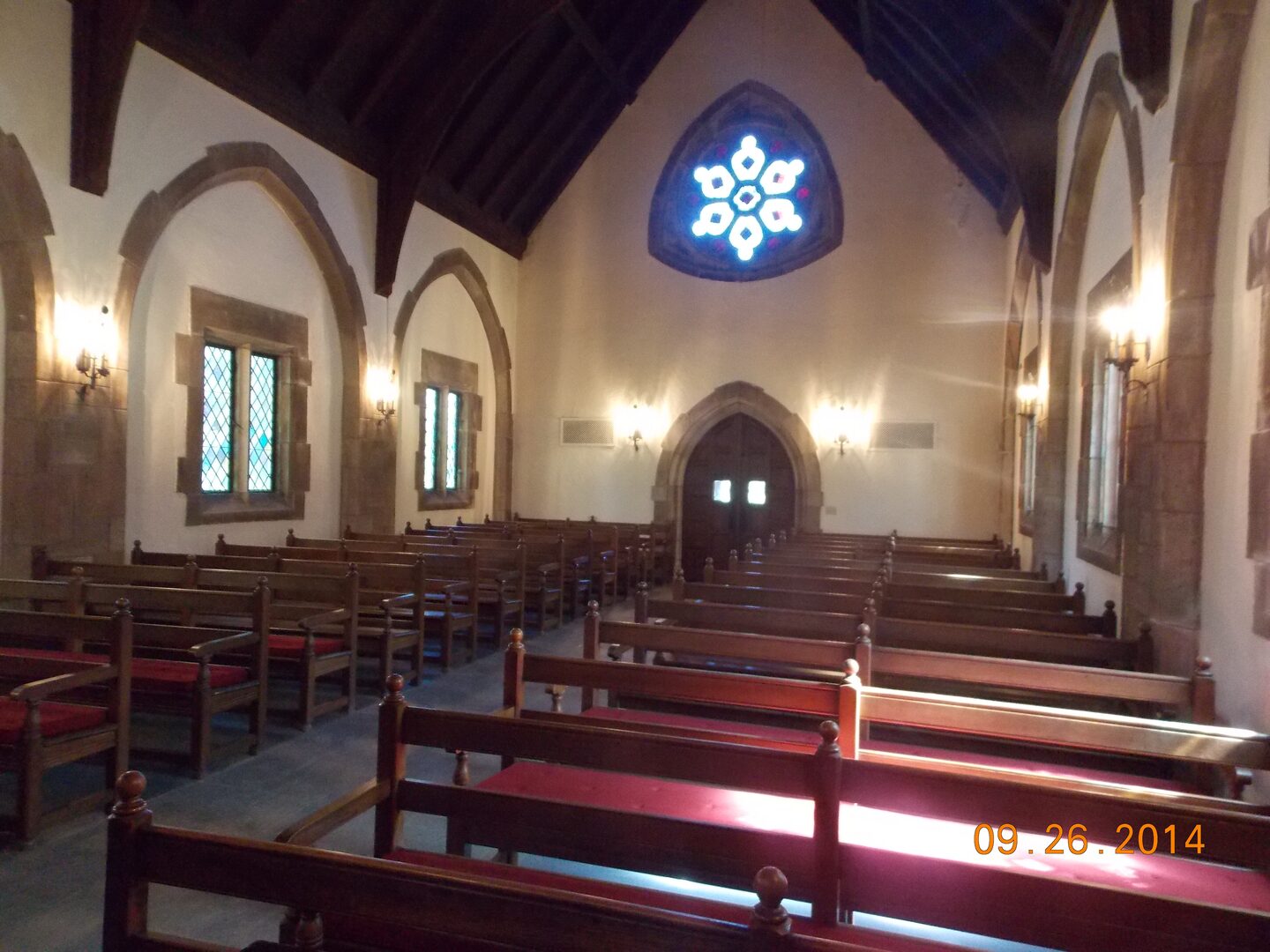 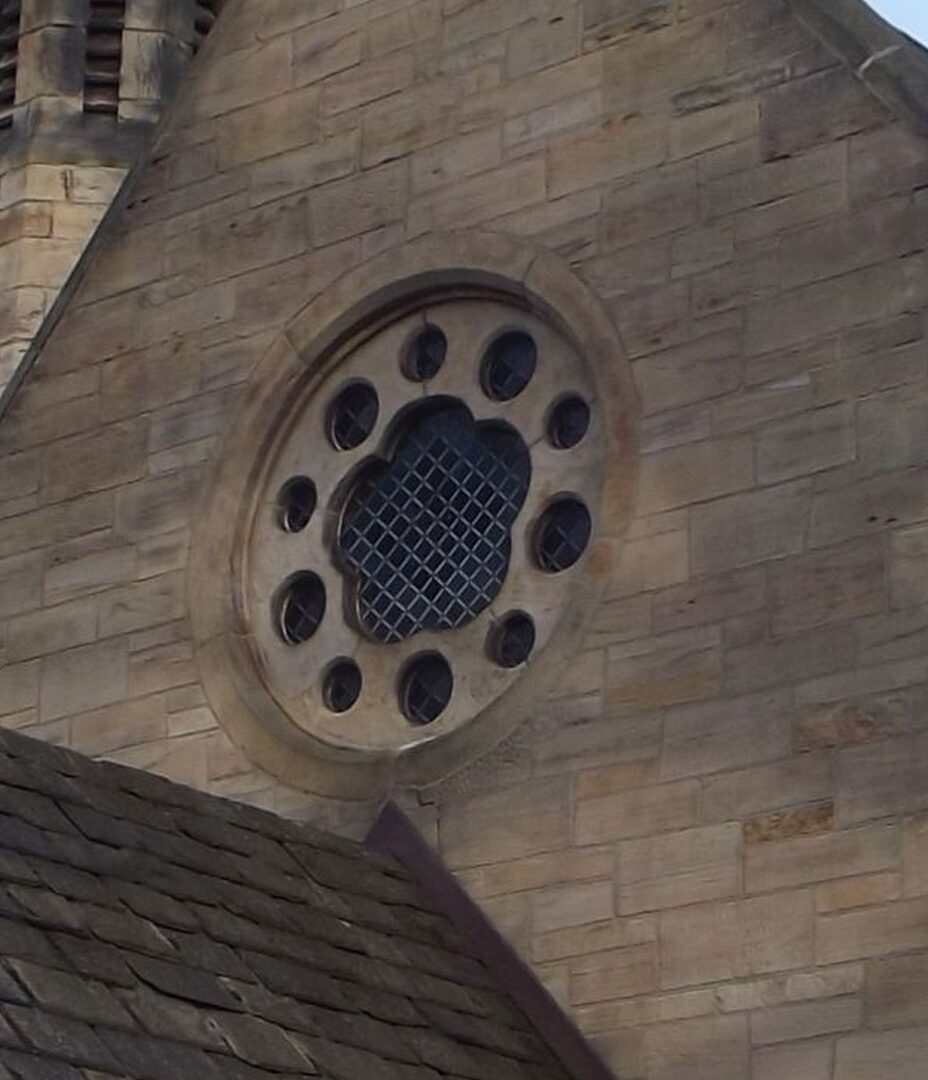 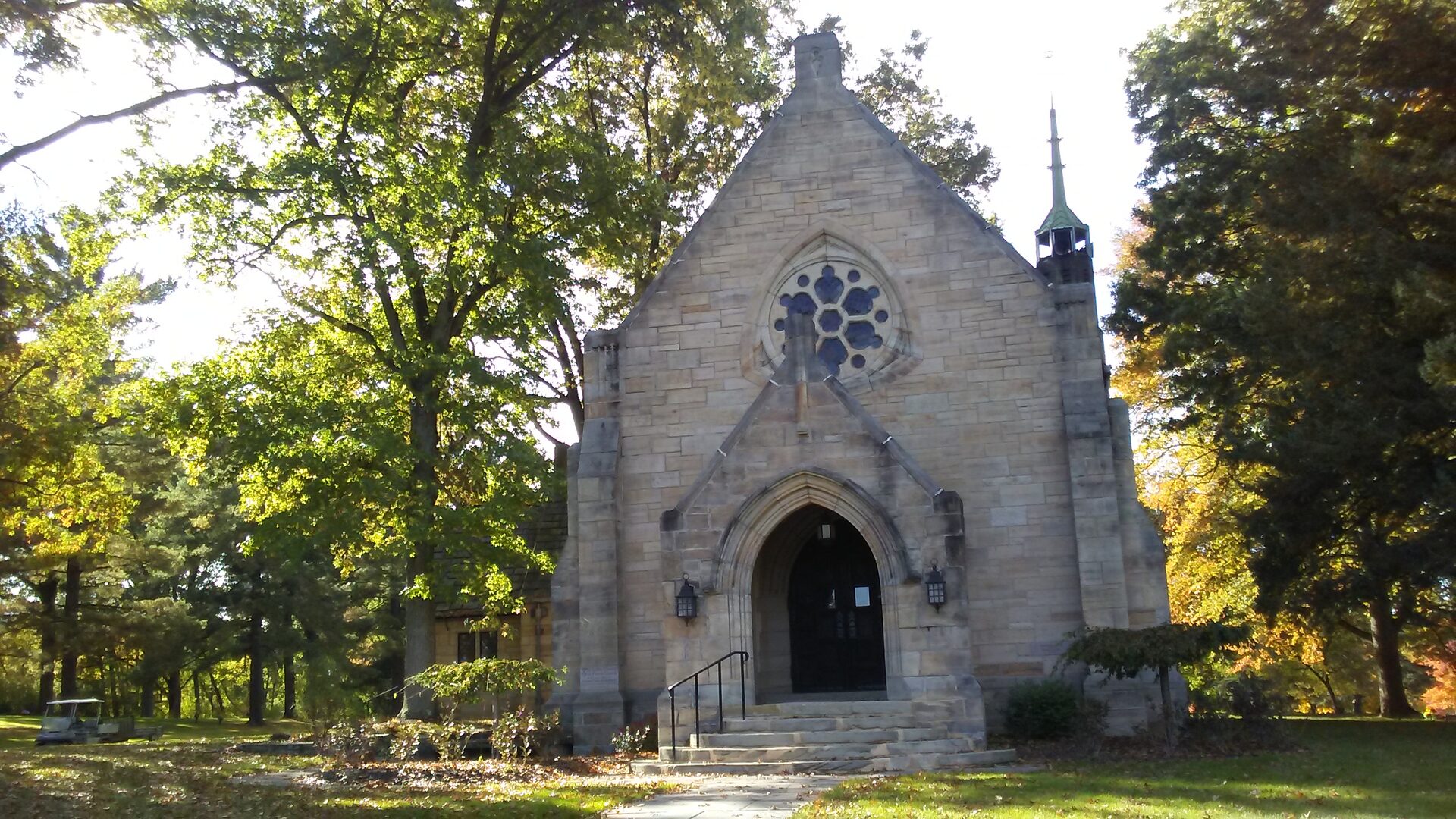 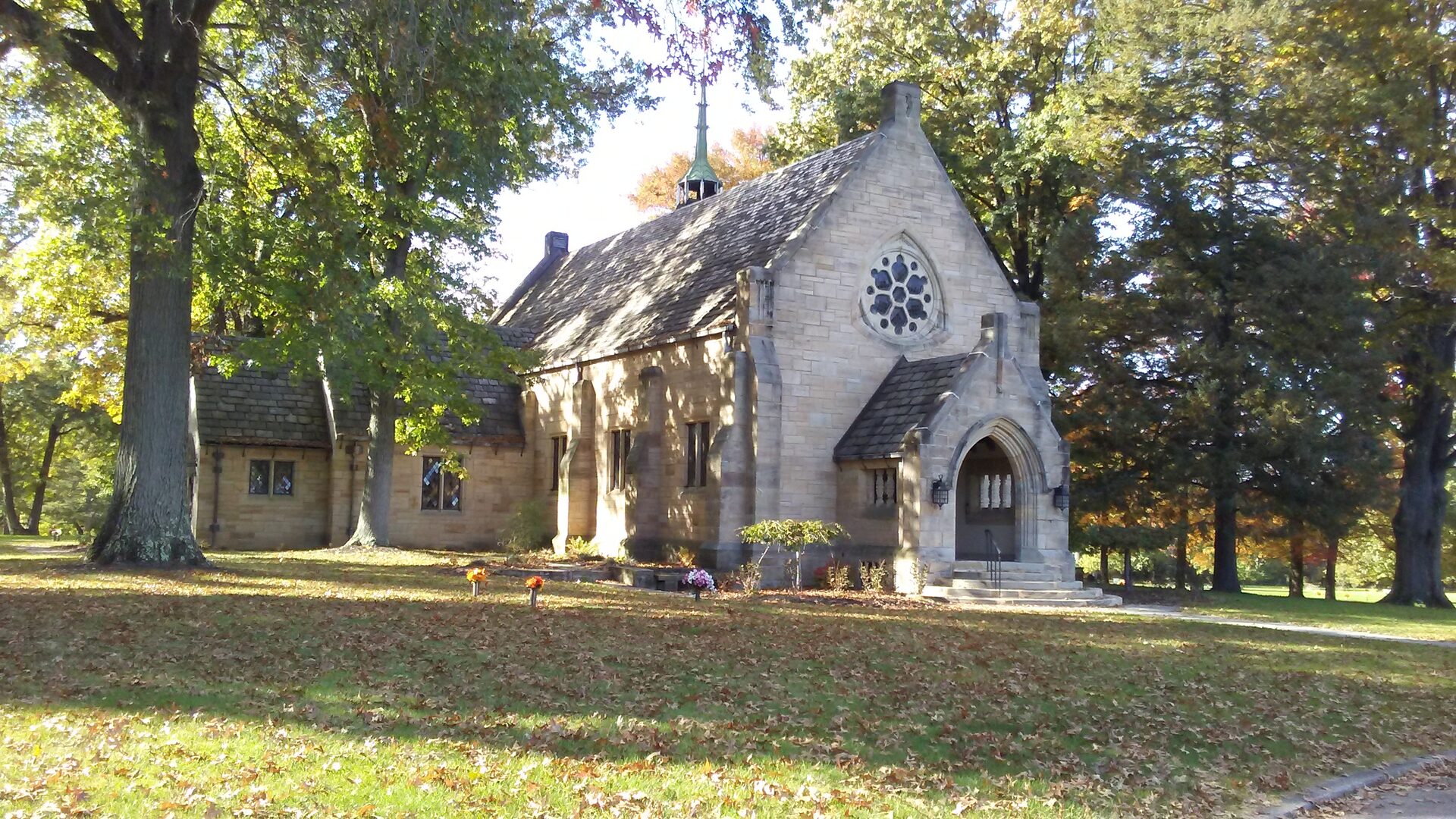 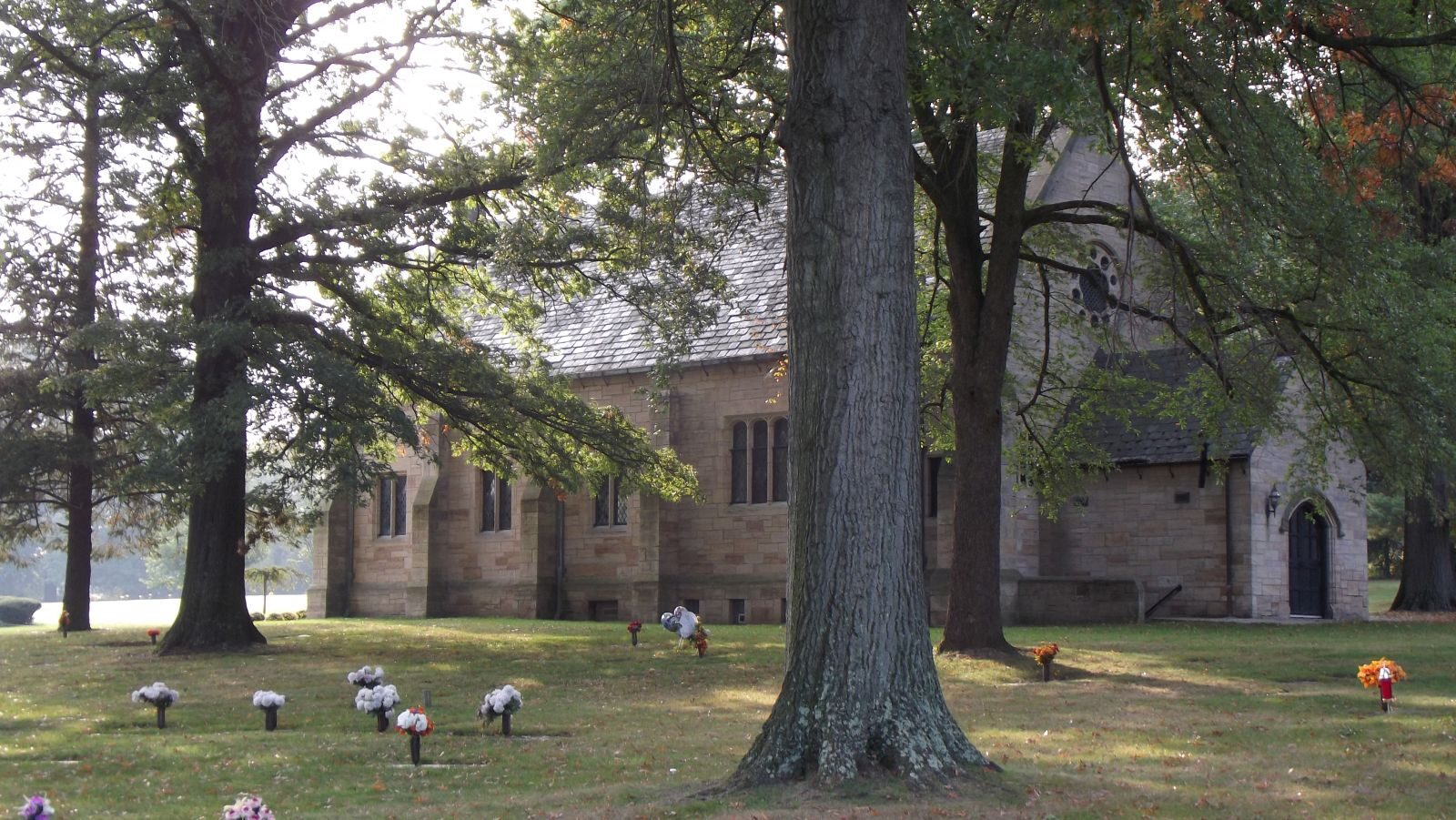 Most of the original features from the 1930s features survive today with the exception of the fountain on the boulevard across from the Chapel's front entrance. The fountain was removed sometime in the early 1990s when it became too expensive to repair. Monroe Walker Copper designed many of the original features. The old lead Cistern/Zodiac was purchased in England. Below are pictures and information on the features. 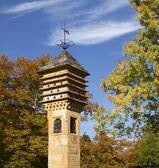 The late years of the depression and war years slowed the development of the cemetery. The 1950s brought on a strong post-war economy. Money was once again available and construction resumed on the construction of new features to add points of interest and beautify the grounds. Pictured below are the features that were built during this period. 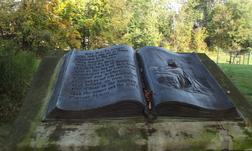